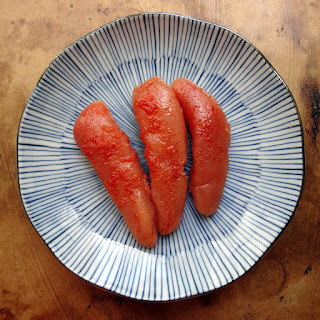 Mentaiko, especially spicy karashi mentaiko, is a specialty of the Hakata ward in Fukuoka City. Mentaiko is fish roe (normally pollock) that is marinated in chili, sake, konbu and yuzu citrus, and then slightly fermented for several hours.

Karashi mentaiko is so popular that usually the term "mentaiko" refers to the type that is spicy, while "tarako" is the regular marinated roe.

Mentaiko is actually originally Korean, as is a lot of the ingredients and dishes that Kyushu is famous for as they are very close to Korea there in the southern regions of Japan.

Mentaiko can be seen traditionally served by itself as a side dish to sake.  It can be eaten raw or cooked (it turns a lighter pink when cooked) and either in its egg sac or removed.

One of the more traditional ways you will see it served is over rice with the egg sac intact, where it is often cooked with a bit of oil first. Another traditional use is as a filling for onigiri rice balls or topping sushi, however these days this flavor powerhouse isn't limited to just rice.

You'll find mentaiko incorporated with cream as a delicious pasta sauce, used as way to spice up egg omelettes, baked on top of french bread, mixed into potato salad, spread on top of skewers of chicken, and even as a topping for Japanese pizza! One crazy concoction I love is mochi baked with cheese and mentaiko for a gooey chewy savory-spicy mess.

Here in the states, you can find mentaiko at Japanese grocery stores like Mitsuwa and Marukai. It freezes fairly well, which is good because it's not cheap!

Recipes that use mentaiko:
Fries with Mentaiko Mayo Dipping Sauce