Adventures in Japan: Beppu and Yufuin! 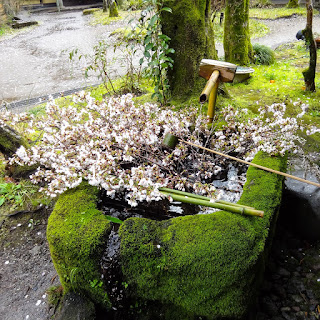 Beppu and Yufuin are both resort towns in the Oita prefecture in Kyushu. We stopped at both along our way back from Yawatahama back to Fukuoka.

After leaving Yawatahama (I fell asleep on the ferry back, it was a very long day), we arrived in Beppu to spend the night at the Umine hotel in Beppu. Our relatives wanted us to try the onsen hot springs that Beppu is famous for, but worried that we would balk about getting naked in a public onsen. So instead, this hotel had a private onsen bath with an ocean view in our hotel room! The hot spring water is piped into an outdoor patio for private enjoyment without having to even leave your room.

This also was a secret bonus for me, as I have several tattoos, a no-no generally for public onsen. I had fretted about the onsen as soon as I heard we were going to Beppu as one of my tattoos is way too big for a cover up.

It was amazing to float in the hot spring water and hear the ocean waves outside, even more so since I was worried I would have to sit this experience out. They also supplied us with yukata and geta which we wore around the hotel in between soaks in the hot tub, and I was very pleased I could wear them around, as a plus-sized American girl I'm bigger than their average guest.

After running around non-stop in Fukuoka and Yawatahama, this experience was heaven but we quickly fell asleep on the softest futons I've ever met. I was so exhausted I stumbled around like a zombie and my mother gleefully shot the photo displayed on the right. Even I have to look back and laugh at myself!

The next morning, we had an extravagant traditional Japanese breakfast. I amused my relatives by taking notes on it so I could be sure to blog about it later. It was the perfect Japanese ryokan vacation in miniature, with the onsen, the food, and the yukata/geta clothing. But soon enough, it was time to be on the road again!

On the way back to Fukuoka, we stopped by Yufuin. It was beautiful and pastoral and everything you'd want a little mountain resort to be. The first picture I shared above was right outside of the cafe we stopped at, and even the ground we walked on was gorgeous. We wandered around, taking pictures of the birds, the greenery, the cherry blossoms, and the streams. Some day I will come back and spend an entire vacation in Beppu and Yufuin!

Later, when we visited Tokyo, I was talking to a native Tokyoite who was jealous that we went to Beppu and Yufuin. He stated a lot of foreigners go on vacation to Tokyo, but the Japanese love to vacation in Beppu and Yufuin and he really wanted to go there.

Oita Prefecture is known for kabosu limes, which I was able to try and can vouch for their deliciousness. I wish we had the variety of citrus that Japan has here in America. Oita is also where shiitake mushroom cultivation began and they remain the largest producer of dried shiitake mushrooms. Yuzu jam is a favorite souvenir to bring back from Yufuin, so we made sure we got some as well! Some of the regional dishes: yoshino tori meshi, a rice dish mixed with burdock root and chicken, and dangojiru, a soup made with handmade thick wheat dumplings.

What will I be featuring from Beppu and Yufuin? A restaurant review and a recipe! Stay tuned or follow the links below: