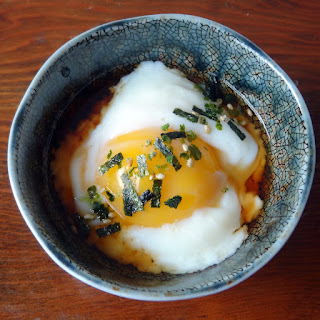 In Beppu, there is a whole cuisine of cooking using the hot steam that erupts from the earth. Called jigokumushi (地獄蒸し), it literally means "hell steaming" which is perhaps my favorite name for a style of cooking, ever. Baskets of food are lowered into the surprisingly powerful steam of the hot springs and a short time later you have fresh produce, thin cuts of meat, and eggs cooked in the steam. There is even a jigokumushi pudding, where a flan is steamed in the mineral-rich steam that jets out of the earth.

I obviously couldn't share a recipe with you on jigokumushi as I don't know about you, but I don't have any hot spring jet steam handy and I think my steamer at home wouldn't be a good substitute. So I am sharing something just as traditional to both Yufuin and Beppu: Onsen Tamago (温泉卵).

Onsen Tamago literally means "hot spring eggs," and as you might have guessed, is named because the eggs are traditionally cooked in hot springs and served at ryokans (inns). Rather than the steam jets of jigokumushi, the eggs still in their shells would be lowered in baskets or nets directly into the hot springs themselves. 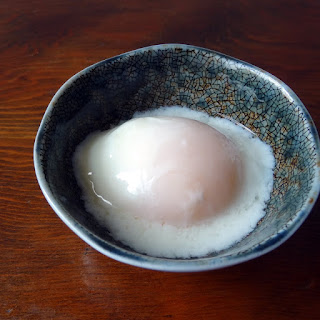 Now a lot of people describe these bad boys simply as eggs poached still in their shells, however that's only the tip of the iceberg. True onsen tamago are inverted poached eggs: the yolk will be firmer than the whites. Rather than a poached consistency, the whites will be a looser softer custard. The yolk will have a firmer texture--almost pudding-like--while still remaining creamy.

How is this achieved? The science behind onsen tamago is that the yolk and egg whites actually cook at different temperatures. Egg whites don't start to completely solidify to the poached texture we know until 80 degrees Celsius or more, while egg yolks start to solidify at only 60 degrees Celsius. 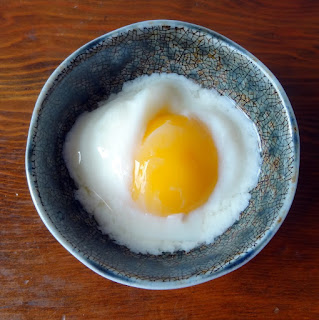 If the egg white is firmer than the egg yolk, you've got an egg poached in its shell which is nifty, but the best and I argue true onsen tamago must have this crucial difference in textures. The inverted nature of the onsen tamago sets it apart from a normal poached egg and it makes all the difference in the taste!

How do we accomplish this? By keeping the temperature low enough to keep the egg whites custardy and gel the yolk.

There's a ton of different methods out there, and by far the easiest would be to set a sous-vide cooker to 145 degrees Fahrenheit and come back in an hour to find them perfectly done. 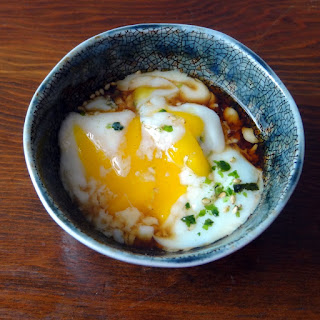 Yeah that's not a typo, I said an hour--these puppies take forever--especially since I don't have a sous-vide machine handy. But I swear that they are worth it and my method doesn't take an hour. Traditionally these are served with a broth similar to what is used in a lot of noodle dishes (see Toshikoshi Soba and Tsukimi Ramen) only more concentrated. I top mine with furikake, but thinly chopped green onions are also a great way to bring a bite to this creamy dish.

I think these eggs are fabulous with some toast for a western spin on the dish. Also try topping donburi like gyudon with an onsen tamago!

I like to use a larger pot than you'd think necessary as it will be steadier in regards to temperature: it 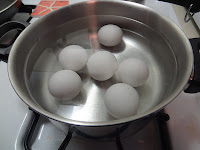 will lose and gain heat less rapidly than a smaller pot of water. 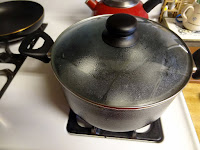 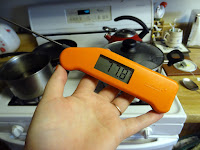 I don't even have to check the temperature anymore as it reliably hovers around 148-152°F without fail with my stove but every stove will be different. I like to make these when I'm making something else at the stove, so I can keep an eye on them.

You can separate the looser whites if you want, but I've never bothered unless I'm serving on toast. Just use a spoon to pick up the egg and leave all the excess whites behind.

After 30 minutes, place the eggs in an ice bath or crack and eat immediately. These can be refrigerated up to one week in their shells.

To make the broth for topping:

The mixture above of soy sauce, mirin, and sugar is called kaeshi, which we will dilute with dashi to make the broth to top the egg with. These quantities can be doubled or tripled and the kaeshi can be placed in the fridge, where it can be stored for months.

Take the kaeshi and dilute with dashi to make the broth. This is a rough 1 to 3 dilution of kaeshi to dashi, feel free to do it to taste. I recommend chilling this mixture for in the summer!

Simply pour a little of this broth around the egg and top with furikake, sliced green onions, or whatever you fancy! 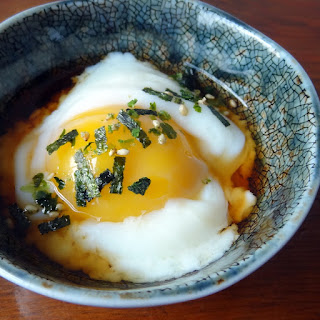