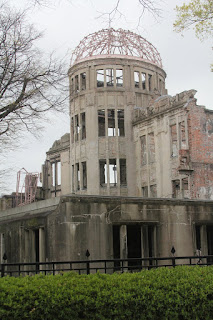 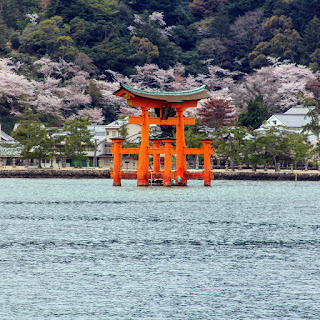 Miyajima is an island in the Inland Sea of Japan right near Hiroshima. I find it funny that the actual name is Itsukushima, but everyone calls it Miyajima which literally means "shrine island" because of its famous shrine.

Itsukushima shrine is an UNESCO world heritage site and the island features one of the most beautiful views in Japan: the floating torii gate, shown at the top at high tide with a boat passing through it. It's a gargantuan torii gate that looks like it is floating on water during high tide, and then during the dramatic low tide you can actually walk right up to it.

The entire shinto shrine is built over the water! While we were there, there was a couple getting married at the shrine. There were so many Japanese tourists gawking at them (we were one of the few foreign tourists) that I wondered why anyone would want to get married in such a popular place.

Besides an awesome shinto shrine, Miyajima has a buddhist temple and a five-story pagoda just a short hike up some steps above the shrine. The view from the pagoda is worth it: you can see all the way to the floating torii gate.

My favorite part of Miyajima was the fact that the whole place was filled with deer with no fear of humans. We were actually warned to be careful not to feed them anything, or else you'd be mobbed. Not only food, but paper was also something you had to watch closely: I saw plenty of distracted tourists end up playing tug of war with a deer as the deer snatched up their maps and started chewing.

When I went, the deer were all shedding out their fuzzy winter coats and were pretty patchy compared to their photogenic spotted summer coats. But that means they loved being scratched to help loosen up that fur. I had way too much fun with this!


My other favorite part of the island was that there were no cars and tons of food places all along the main road. It was such a small island I couldn't get lost if I tried and everywhere there were signs advertising for fresh oysters, hiroshima-style okonomiyaki, fish cakes on a stick, and momiji manju: wheat cakes baked into the shape of a maple leaf and filled traditionally with sweet red bean paste but also chocolate, custard, green tea, and more. I would get very fat and die early if I staying on that island, but I would have fun doing it!


What will I be featuring for Hiroshima and Miyajima? A look at all the train food and a recipe! I know you're curious about what I could possibly feature about a train or a train station, but stay tuned or follow the links below. 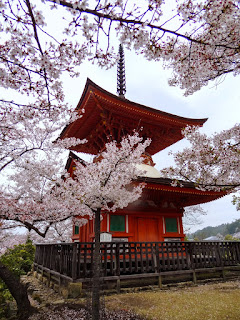 A look at Japanese Train stations and Ekiben
Hiroshima-style Okonomiyaki