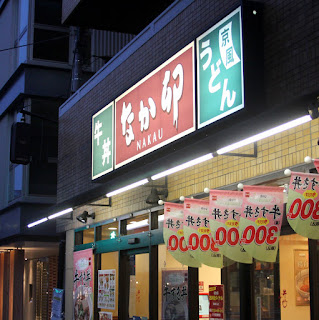 Nakau uses the ticket system, where you purchase what you would like from a machine and then hand your ticket to your waiter. This process was a lot less tricky than I imagined. I forgot to take a picture of the machine because of a mix up (see below), but here's a post that will walk you through the whole process with pictures.


We had a little bit of a hilarious-in-retrospect-but-horribly-embarrassing-at-the-time moment with this machine. To give you some background: my mother does not frequent fast food or even fast casual restaurants. On a recent trip to Nashville, she managed to pull past the ordering spot in the drive through, and didn't understand the concept of two drive thru windows (you pay at the first one, then drive up to the second window to get the food). So even in her native language it's not really her wheelbase. So when we went to Nakau, we were confused why she didn't get her food despite being the first person to present her ticket. The language barrier hindered us at first, but we found out that she accidentally handed the waiter a random receipt from a different day, who of course thought she just wanted him to throw away trash for her. My brother and I were utterly bemused that she could lose a ticket that fast!

The whole restaurant was one long counter that snaked around, so we sat down at the counter and were greeted by a giant pitcher of iced green tea that was self serve. Love it! Also helpful is that they had several different sizes of most dishes depending on how hungry or strapped for cash you were.

My brother got their katsu curry rice, which he thoroughly enjoyed. We were surprised at the large quantity of tasty veggies in the curry, as we weren't expecting anything but curry sauce to be honest. The shichimi togarashi at the counter allowed for him to customize the amount of heat in the dish. 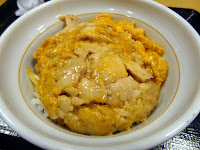 I tried the oyakodon, which is chicken simmered with egg and dashi before being poured over rice. It's similar to my una tama don, except with chicken instead of eel. I need to make this dish for the blog! At first I was apprehensive because it came out looking like just chicken and egg, but as soon as I dug in I found plenty of onions! They had enough simmering liquid to flavor the rice just the way I liked it. 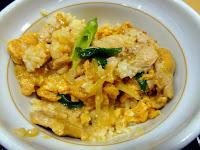 My mother chose the special they were promoting: gyudon with mushrooms and tofu. She got the smallest portion, which was just ¥300. At the time, the exchange rate was pretty flat and this converted to only $3! Here in the United States, I can't think of a national chain in a major city where you can get an entire meal, balanced with protein and veggies, served in a real bowl rather than styrofoam, with complimentary drink, all for $3.

Our experience, Mom's snafu with fast food excluded, was a pleasant one and we were happy with both the service and quality of the meal, especially for the price.

If you want to get the experience of how a salaryman eats in Japan, go to Nakau. We were surrounded by men in their 30s. Honestly, compared to our 1000+ calorie Chipotle burritos, they aren't doing too badly and I can see firsthand why Americans are so fat compared to the Japanese!


Fun fact: internationally the symbol for the Japanese Yen is ¥, however in Japan it's 円.