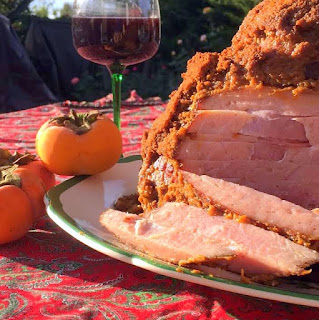 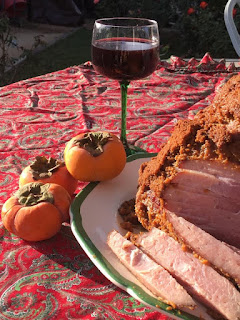 My mother has a smoker and uses it for just about anything she can, so I have included the instructions as she makes it, as well as an adaptation for cooking it in the oven like I would.

Make sure when you serve this, you  spoon any curried gingersnap dressing that falls off during carving onto the ham!

This also tastes delicious cold in a sandwich, and you can use any leftover of the curried persimmon mixture to spread on the sandwich bread for an extra punch of flavor!

Chop up the curry roux block roughly into chunks, then place in a small saucepan with the water over medium heat, stirring and breaking up clumps until it has dissolved into a paste.

My mother likes to use a double boiler so she doesn’t have to closely monitor this while she moves on to the next step. If you don’t have a double boiler, make sure you don’t burn this! Take off the heat as soon as the curry roux block has completely dissolved.

Once you have removed any seeds you find, place in a food processor and pulse the persimmons until fully pureed. No need to peel.

Take your ham and put cut side down on a rimmed baking sheet covered in foil for easy clean up.

Add the persimmon puree to the curry paste and stir to combine. Take this curry persimmon mixture and slather all over the available surfaces of your spiral ham (everything but that cut side you have down).

At this point, if someone walks into the kitchen, will they be forcibly reminded of the mashed potato mountain in Close Encounters of the Third Kind, only recreated in ham and gingersnaps?

If yes, you nailed it.

Next, spray entire surface with the cognac until all the gingersnaps are sprayed. A teeny spray bottle is the easiest way to accomplish this.

You may not use all of the gingersnaps or cognac, as these are pretty approximate amounts. You can freeze any crushed gingersnaps.

To smoke your ham in a smoker, get your smoker going on high to get a good smoke going, then turn down to low and place your ham inside. My mother recommends wood pellets rather than chips because they smoke at a lower temperature and uses a mix of apple, hickory, and cherry wood, but use your favorite! Smoke until internal temperature reaches 140°F, about 2.5 hours.

To bake your ham in the oven, set oven temperature to 325 and bake for approximately 50 minutes, until internal temperature reaches 140°F.

Either way you decide to heat it up, once the internal temperature is hit you are good to serve!

*You can also use the hachiya type. Just make sure they are completely ripe!

**The Japanese curry roux blocks come commercially most commonly in two different sizes: 3.5 ounce box or a 8.4 ounce box. If you have the 8.4 ounce block, just use half of the container. 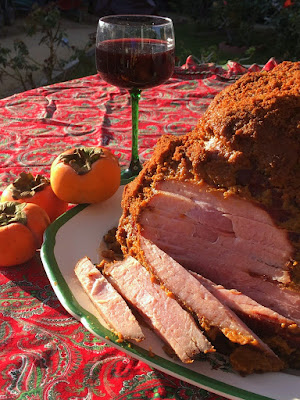