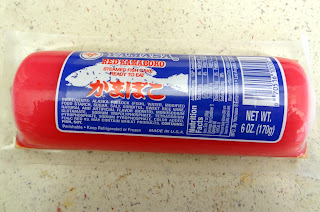 Kamaboko is traditionally used in Japanese cuisine as a topping for soups, noodle dishes, bentos, and hot pot dishes. Japanese American uses for it include creamy dips, as an alternative to crab in crab salads, and in somen salad. You can purchase kamaboko at any Japanese market, and most likely most of the other Asian markets. If you're in Hawaii, you can buy it in any grocery store (I'm jealous!).


You will also see narutomaki, a type of kamaboko that has has a fun swirl in the middle and is round rather than half moon. They taste exactly the same.

There are some other surimi products that I've used on this blog that slightly different in taste, however.

Chikuwa (竹輪) is a surimi product very similar in taste and texture to kamaboko but instead of being formed on a piece of wood, it is molded around a bamboo or metal stick before being broiled. This creates an airy skin around the fish cake edge that works very well in soups to absorb sauce.

Satsuma-age (薩摩揚げ) is another type of surimi product where the fish cake is deep fried. Sometimes you will find the fish paste is first mixed with other ingredients like onions, ginger, or even other meats such as shrimp.

Last but not least, hanpen (半片)is made with surimi that has been boiled, which yields a softer and more delicately flavored fish cake.

Dishes that use Kanikama:
Ehomaki