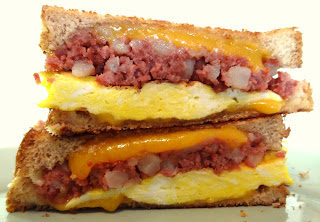 I guess you could say I am a canned meat aficionado. I love spam, deviled ham, and canned corn beef hash.  Now I love deviled ham and hash made fresh, but canned hash is definitely a comfort food.  My mother first introduced me to hash when we were staying up in a cabin in Big Bear to go snowboarding.  Since it wasn't much of a kitchen in the cabin, she had canned hash and other such easy prep items for us on vacation. One chilly morning, she took a can of hash and fried it up until it was nice and crispy and a love affair was born. My eyes were like saucers as I proclaimed,

The way I said it, it sounded like toucans. Why I wanted a fruity cereal loving bird was beyond my family, but once I exclaimed, "Not toucans, two cans! More hash!" they got that I was just being a fatty.

Now I can't pick up a can of hash without going "heh... toucans."

It's funny how family memories work. Now my boyfriend has been introduced to hash (it's a gateway drug, people, now he loves spam too), and he requested a hash sandwich. He loves breakfast sandwiches, and I was more than happy to give it a try.

Hash was popular, just like Spam, in the days of WWII where fresh meat was rationed. It was a way to use tinned corned beef with potatoes in order to stretch the meat a little in England, as well as a tasty way to make leftovers new and exciting the next day for breakfast.

I seem to have a love for weird processed foods born out of necessity in WWII. Good thing I don't eat them very often, because they are not exactly health foods.

Butter one side of all the bread.  Crack the eggs into a small skillet and make a big omelet. Set aside once cooked and cut into quarters. Meanwhile, on a different burner, fry up the hash until about half is crispy, but don't overdo it and make it dry.

To assemble the sandwich, place slices of cheddar on the non buttered side of the bread and top with a quarter of the omelet. Spoon the hash on top, pressing slightly to mold it together. Place some more cheese and then the last slice of bread, butter side out.

Put the sandwich on the skillet over low heat, until the cheese has begun to melt and the bread is toasted. Carefully flip the sandwich over and repeat for the other side.