Yōkan Jellies with Chestnuts and Anko 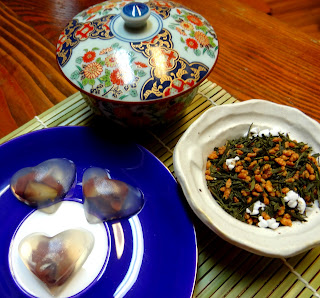 Whenever one of the Japanese relatives would visit, presents would always be exchanged. In Japanese culture, gift giving has its own sets of rules. For instance, it is considered rude to visit a house without a gift for the host. And of course, to be polite, there would be gifts for our relative visiting us from Japan. Another rule is that perishables and foodstuffs are the norm for gift giving, because giving something like decor would be implying that the person has bad taste, and you need to help them with decorating.

As a kid, I was totally down for the foodstuffs. Sometimes our relatives would also bring toys, which were cool too. But most commonly, it would be mochi, daifuku, or yōkan.

Yōkan (羊羹) is a Japanese confection made with agar agar, a seaweed gelatin, called kanten in Japanese cooking.  My mother loves the stuff, but I never was as fond of it as the mochi.  It is usually made with anko, azuki bean paste, or matcha, ground green tea, and can have things like persimmons, gingko nuts, or chestnuts suspended in it. Unlike jello, it can be stored at room temperature for long periods of time, so it is perfect for gift giving.  It is commonly served with tea, just like daifuku.


Having made daifuku, I decided to try to make some yōkan.  As previously stated, I saw Rice N Roti's recipe and it looked easy and fun to do. It is surprisingly easy, but I have some ideas for next time (see below). I made mine in an heart-shaped Ikea silicone ice cube mold, since I don't have any fancy molds.

Cut the chestnuts into desired size. My ice cube mold was so tiny, I cut chestnut halves into quarters. Take an equal sized piece of anko and put it with the chestnut. Heat the water in a saucepan and dissolve the sugar and kanten over medium heat after the water boils. After everything is dissolved, turn the heat down as low as it goes to keep the kanten warm. Fill up the ice cube molds halfway with the kanten, and place in the fridge for about 5 minutes, or until set. Place the anko and chestnut in the mold, and fill up the mold the rest of the way with kanten. Place in the fridge until set, about 30 minutes.

When I brought these over to my mother, she burst out laughing. She said the chestnuts and anko looked like chicken livers or something dead and preserved in jar for a science lab (you gotta love Japanese mothers... so supportive and kind). My molds were so shallow, you could see them very clearly sitting at the bottom and it certainly wasn't as attractive looking as Rice N Roti's version. My mother suggested next time to make it more traditionally, where the anko is melted into the kanten so its not perfectly clear, or chop the chestnuts and anko into tiny bits so it is more evenly suspended throughout, rather than sitting in a lump at the bottom. It didn't affect the taste, as she popped one in her mouth, still giggling at my yōkan attempt.

In the photo above, I think my heart-shaped yōkan look very pretty! Harumph!