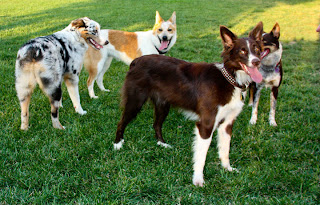 The Dog Days of Summer are here! In celebration, and because I am slightly obsessed with my dog, I'm doing a blog series on some So Cal dog friendly restaurants.

Now, I look at just about any restaurant that has a patio as fair game as long as the restaurant is happy with it. Tiara loves Knowlwood's and In-N-Out, but its hard if you're alone because you have to tether your dog outside while you go in and order, and then again to pick up your order.

But first, some tips on bringing your dog to a restaurant after the jump:


1.) Bring a leash and a well fitting collar that your dog cannot back out of.  Just in case you have to tether your dog to use the restroom or something if dining alone. I don't care if it's a teacup chihuahua, it's not supposed to go inside places that serve food unless it's a service dog.

2.) Bring a water bowl and some water.  I don't always do this if it's going to be a short trip, but the last thing you want to do is be sunbathing and chatting over a drink while your pooch is thirsty and hot. *Also, clean-up bags!

3.) Train your dog. It should know sit, down, stay. It shouldn't growl at other guests or yap incessantly. Remember that having your dog in a public place means your dog becomes the ambassador for their breed as well as most dogs in general.

4.) Respect other dogs. My biggest pet peeve is people who see another dog, and let their dog run up to that dog. Case in point: a couple with a young dog said,

"Omaigosh my dog loves other dogs, can she say hi?"

I told them no, that I don't allow on-leash greeting because a lot dogs misinterpret other pup's body language on leash, and are leash aggressive. Including my dog. Plus when you have food, excitement, and tons of people, its just not a good atmosphere to introduce dogs to each other.

The puppy ran up and bit my dog. To be fair, the pup was just trying to play, but you don't just run up and bite another dog even play bite, just like you don't punch someone on the shoulder without knowing them, it's rude. My dog was so shocked, she just stared at the puppy, and gave her a look like "Oh pup, you try that again, I DARE you."

The puppy ran back to its owner with its tail between its legs. So did the owner, who was very embarrassed.

I'll be adding links to my reviews as I do them!