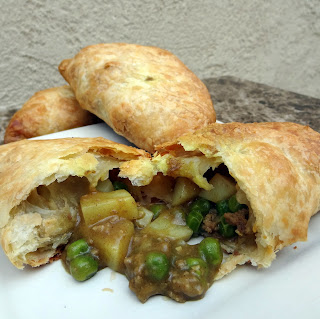 When talking about my blog, my mother wanted to know if my blog followers were aware I was "The white girl version of a Japanese person," and I assured her that anyone who clicks on the About page would know I am very Caucasian in appearance, jokingly telling her, "Don't worry, they know I'm Jet Puffed Japanese!"

I think she was worried people would be deluded into thinking I'm some sort of wannabe Harumi Kurihara of the States. (Harumi Kurihara is like the Japanese Martha Stewart, and her cookbooks are awesome by the way). Just because I resemble my nickname (white, squishy, and sweet describes both me and mochi) doesn't mean I don't love sharing my hapa Japanese dishes with you all.

Even in high school, kids would look at me and tell me I don't look Asian enough to call myself part Japanese. Funnily enough, with his dark hair and more olive complexion, my brother would pass their test. 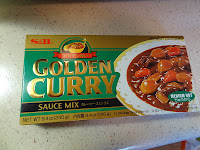 The best thing about being white-as-a-marshmallow yet also Japanese American, is that I am free to mix my cultures as you see fit. Especially since my mother and grandmother were bit of rebels when it comes to cooking, we all blur the lines a lot. Tuna sandwich with a side of ramen? Check. Tsukemono and deviled eggs at Thanksgiving? Every year!

So when I decided to bust out the puff pastry dough to make some meat pies (I love pasties) and instead ended up with a Japanese American version, I don't think either of those cooks would be surprised.

This recipe will make quite a bit of curry, it's designed to have leftover filling to serve over rice later as kare raisu. Unless you want to make a ton of turnovers, which is totally a good idea because they are delicious. I had a circular hand pie press I was dying to use, but honestly I think you get more use out of the puff pastry by cutting it into squares. Save the cute half moon pie press for when you have your own dough. 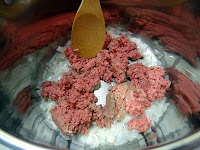 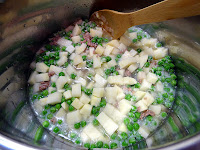 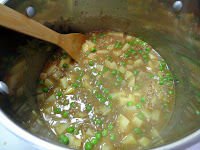 Heat the onion and butter over medium heat in a saucepan until the onions are fragrant. Add in the ground beef and break up the chunks as it cooks until it is no longer pink. If necessary, drain off excess fat. Add in the water, potatoes, and peas and heat until just about to simmer. Add in the curry roux blocks and stir until dissolved. Simmer until the sauce is thickened and the potatoes are almost soft enough. Preheat oven to 400 degrees Fahrenheit.

Cut each puff pastry sheet into four equal squares. Spoon about 1/4 cup of the curry into the center of each square and fold over into a triangle. Too much and your dough will break, so be careful not to stuff too full. Use a fork to crimp the edges shut, and cut a vent hole on top. Bake the turnovers on a baking sheet lined with parchment for 20-25 minutes, or until the pastry is puffy and golden brown. 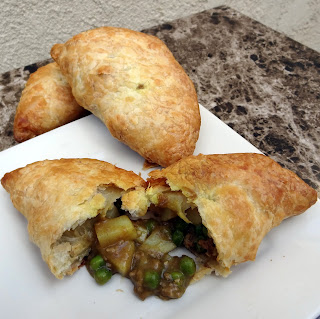