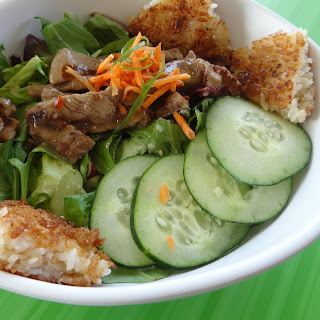 I've written about Yoshinoya's donburi before in my donburi recipes, and I'm definitely a fan of their gyudon beef bowls. Recently, however, I got to sample their new fare at the new Asiana Grill.

While their classic beef bowl is still available, along with a chicken pineapple bowl, the Asiana Grill menu is completely different from a regular Yoshinoya. How it works: you pick a meat (or tofu), an entree style, and a sauce. My mother compared it to restaurants like Chipotle, where you pick burrito, taco, or salad and then choose your meat and additions.

So I am sure you are thinking, will this new restaurant style work for Yoshinoya's cheap and healthy Japanese fast food? Let's find out after the jump!

First, let's break down the entree choices they have: 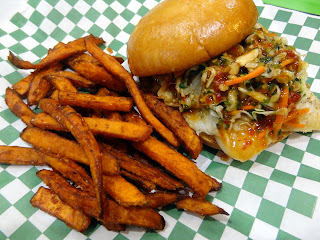 So when Mr. Mochi and I went there, I decided I wanted to try the Great Yellow Bun. I figured if they were able to pull off sweet potato fries and a burger, Yoshinoya might be onto something.

I ordered the grilled whitefish ($6.99) with gekikara sauce, which is a spicy and gingery soy based sauce. I was apprehensive about the asian slaw: I'm weird and picky and usually don't like lettuce on my burger or tacos because it ends up wilting, warm and gross before I've gotten a single bite. But seriously, just dig in. This was a total surprise meal that really changed the way I felt about cabbage in a burger. Tangy and crunchy, the slaw complimented the spicy whitefish in textural contrast as well as flavor. The bun was also very good, soft and pillowy and on the sweet side, but able to hold up against the generous portion of slaw and fish in the sandwich.

The sweet potato fries were also tasty, and this is coming from a person that prefers her fries to remain strictly potato. A nice salty crust on the outside but soft and sweet on the inside, they are good enough to eat on their own, or dipped in the spicy yuzu green sauce available next to the drink station (They also have ketchup... yeah no). Mr. Mochi helped me with both the bun and fries, since we had a lot more food coming, and he knew what he was getting next time. 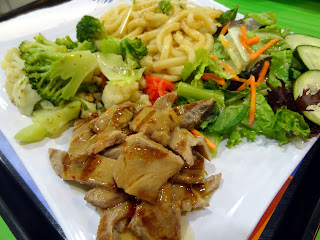 His entree was the big platter with sweet and sour charbroiled pork ($7.59). The sweet and sour sauce was a refreshing change from most fast food establishments in that it was sweet and vinegary with a nice chili hint, compared to the usual gloppy sugary concoction. We both detest over-steamed veggies, but these were excellent and retained a welcome crispness. He chose steamed udon noodles as his side, because we have already tried steamed rice at Yoshinoya (hard to mess up with a rice cooker) and were determined to try everything new. The udon noodles came as a complete surprise to me; they are usually too gummy and bland for me to enjoy as much as ramen or soba. These, however, were very flavorful and had a good firm texture. I was so impressed I asked the chef how they managed to pull it off. The answer: instead of boiled in water, they were boiled in a dashi mix with chili pepper, garlic, and ginger. Yoshinoya also offers them grilled, which we will totally be getting next time!

The Asiana Grill also offers a ton of drinks, even alcoholic! Not being huge drinkers, we stuck to their cucumber lemongrass and lychee lemongrass ($1.95). Mr. Mochi is supremely picky about drinks, hates tea and coffee, yet still found the cucumber lemongrass to be tasty. Both are a bold offering for such an establishment, and I think they nailed it.

While nomming on our entrees, the kitchen brought us some appetizers to try: their new ginger-chili edamame ($2.99) and classic wings (6 for $4.29). These wings were fried unbelievably crispy and served with a modest coating of spicy gekikara sauce, and the meat is tender and juicy. You can get whatever sauce you want, but I definitely suggest getting the gekikara for a not-too-hot kick. Mr. Mochi's jaw was on the floor as I chowed these down and demanded that next time we must order them, because usually I will refuse to eat any meat off the bone. 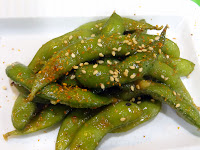 The ginger-chili edamame were sprinkled with red pepper and sesame seeds and were a welcome and inspired change from plain edamame. However, these are much messier than normal edamame, so make sure to have some napkins handy. If you're like me and insist on ordering some chicken wings, you will be ready for these as well. I could eat just appetizers here and be happy!

We finished off with their chocolate covered frozen banana ($1.79) and cheesecake ($2.09), coated in Daffy Apple Crush. Word of warning: the cheesecake looks small, but it is seriously rich and you will be happy with the serving size. I didn't know what Daffy Apple Crush was, and another person asked why it didn't taste anything like apples. So I did some googling, and found out it's actually a topping for candy and caramel apples and is actually a cornflake based topping. Very tasty.

Now, this meal was complimentary, and in the name of blogtastic integrity, I had to go back and sample Yoshinoya's Asiana Grill as a paying customer. While my family concluded that this was probably a thinly-veiled excuse to eat there again, they agreed to go and confirm Mr. Mochi and I's experience.

This time, I wanted to try their classic beef bowl ($5.29). I recently ate at Flame Broiler and was aghast to find that they had changed their beef bowl. Instead of soft thin pieces of beef, there was large thick and overly chewy almost gristly strips! I could get past that, but they also changed their magic sauce, perhaps in the name of making it healthier, and it was now weirdly bitter and acrid. I couldn't even finish the bowl, and Mr. Mochi burst out laughing at the mournful expression on my face. That's how much I love donburi, and that's how bad our local Flame Broiler messed it up. Hopefully this is a fluke, but looking at pictures online, I fear I might have lost a donburi friend forever.

So you can understand that I needed a classic Yoshinoya beef bowl to comfort me, to confirm I hadn't lost another comrade. It was just as beautiful as before, with paper-thin beef and generous slivers of onion in sweet-salty sauce, a classic delicious gyudon.

While I stared fondly at my empty beef bowl, my fast-food shunning mother was delighted with her super salad, stating that the dressing was perfect, the grilled rice cakes an addictive addition, and the meat just as good as we had claimed it was. My brother and Mr. Mochi both got the Great Yellow Bun with charbroiled steak and teriyaki sauce, and concurred that Yoshinoya Asiana Grill was a great new concept. 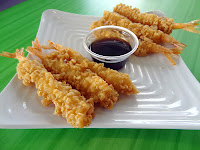 My single beef with the Asiana Grill was that their tempura shrimp (6 for $4.99) was not offered with a traditional tempura dipping sauce, I don't think it needs a heavier glaze like teriyaki or gekikara. I also think that offering their traditional combo and chicken bowls would make people pining for a donburi happy, and it would seem that it wouldn't be too hard for them to do. As long as they keep their beef bowl the same, I will be happy to come for both their new eats as well as their classic.

Now, the kind people of Yoshinoya's Asiana Grill have provided me with two free entrees for my blog readers! My very first giveaway! To be entered to win, just register (so I can grab your email) and leave a comment below. *1/7/13* Contest ended, thank you everyone!

Disclaimer: As mentioned above, Mr. Mochi and I were invited to a complimentary menu tasting. However, I was not even required to blog about the event, let alone paid or pressured to write a positive review. I also visited the restaurant again as a paying customer before penning this, and will be returning again soon in the future. This review reflects solely my opinions, and the prices are at the time of publication.