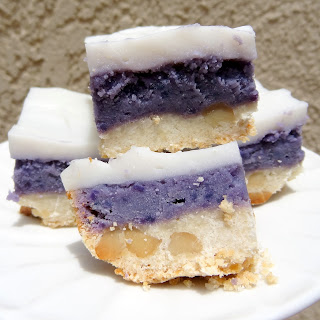 Not that the sweet potatoes are that expense ($1.99 a pound) but the other ingredients add up. I can't very well blow our food budget on sweet potato tartlets! Usually I decide what to make based on what I can make, for instance: tartlets are out because I don't have a tart pan, let alone mini tart pans.

But enough about me being poor. Let's talk about purple sweet potatoes, called beni imo in Japanese. Yes, purple. Not on the outside, which is a very plain off white color which can be disconcerting to a person wandering through a Japanese market looking for these tubers. Even more confusing, "Murasaki" sweet potatoes have purple skin but white flesh! Usually they have the brown skinned orange fleshed brother right next to the Okinawan purple ones, so just choose the lighter skinned one.

The awesome thing about Okinawan sweet potatoes is that the purple coloring is anthocyanin, which is the same antioxidant that gives blueberries and red cabbage their color. The purple sweet potato actually has 150% more antioxidant power than blueberries! They are high in fiber and very nutritious, and luckily are also very tasty.

You can mash them up and eat as is, with maybe a little nutmeg or cinnamon to taste. But I wanted to make something fun with this cool colored root, so I decided on one of the most famous Hapa desserts: Okinawan Sweet Potato Haupia Pie.  Haupia (how-PEE-ah) is a traditional Hawaiian pudding made out of coconut milk and pia (Polynesian arrowroot), but today's haupia is usually made with cornstarch as a thickener instead of pia. Beneath the layers of haupia and sweet potato is a shortbread made with macadamias.

*I cooked mine by cutting the potato into chunks and microwaving with 1/4 cup of water for approximately 9 minutes, stirring once. Then I peeled and mashed them once cool enough to handle.

Preheat oven to 350 degrees Fahrenheit. Mix together sugar and flour and cut in butter for the crust. Mix in the chopped macadamias and press into a 9" x 13" baking pan. Bake for approximately 15 minutes or until golden at the edges.

Wait to start the haupia layer until the other layers have cooled to room temperature. Dissolve the cornstarch in the water, then add in the sugar, stirring until there are no lumps, then add the water mix to the coconut milk in a saucepan. Heat the mixture, stirring constantly until thickened. Pour over the sweet potato layer and refrigerate overnight. Cut into squares to serve.

This can also be made into a pie using a pie pan.

Some of these pictures are not up to par, because I am just learning how to photograph, and I didn't know that cameras needed to be charged... whoops!  I am hoping to redo some of my older posts with better photos as I get better at shooting pics of food.

I will say that I am pretty proud of the cover photo, because I managed to capture as true to life as possible the gorgeous color of the sweet potato. A lot of times it turns out greyish in photos shot in artificial light, as shown to the left.