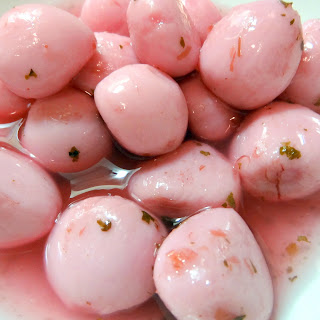 In my ongoing attempts to share with you my favorite ingredients, I would like to talk about my favorite food of all time.

Good thin crust pizza is up there, but I have to say this is indeed my favorite food ever: Shiso Katsuo Ninniku (紫蘇にんにく) or as I call them, pink pickled garlic.

My grandmother would give me a couple garlic cloves as an after-school snack, and for as long as I can remember I've been obsessed.

Now this may sound crazy of my grandmother--handing me cloves of garlic to eat straight--however, let me explain a little bit about the Japanese and their pickles below.

On a side note: my grandmother is totally crazy, but the best sort of crazy and I love her.

In Japan, tsukemono (漬物), which literally means "pickled things," is very popular and is served at almost every meal. Even when you go to the food court at Mitsuwa, they will give you a little thimble of pickles to go with your meal. My boyfriend doesn't like the taste of them, so I eat his share if I am not full to bursting. Most commonly, you will get takuan (沢庵) which is pickled daikon radish that traditionally is colored yellow with the addition of turmeric but nowadays it's probably dyed artificially. My grandmother must be especially fond of shiso katsuo ninniku because it seems to me I had it nearly week, if not every other day.

The pink pickled garlic gets its color from red shiso, which is used extensively for pickling (for more info on shiso, see my post) as well as some of its flavor. Katsuobushi, which is dried bonito flakes, is mixed into the brine to give the garlic cloves a nice umami and depth. Unfortunately, I have never found a recipe for these gems. I have regularly scoured the internet for years, but I think I need to learn more Japanese to be able to make them at home. I keep gathering clues about them, like that they may be made from ume-su, which is the brine made from picking umeboshi with red shiso.

You may wonder why I am so obsessed with trying to make shiso katsuo ninniku. Well in my teens, it vanished. Poof! No more shiso katsuo ninniku at Marukai! I don't know why, maybe it had to do with the collapse of the bubble economy in Japan, or troubles importing into America, or Marukai deciding America didn't need them, or something of the sort. All I know is the rare ones I did find were horrible, made with corn syrup and tasting all wrong. Every time I went to the market with my mom, she would share in my disappointment when I finally found a bag and crammed some cloves into my mouth only to nearly spit it out. My mother even bought pickled garlic from an American specialty pickling store for me, which I tried to doctor up by putting nori and furikake on them. I even fantasized about writing my relatives living in Japan and having them send as many brands as possible over here.

Luckily, there are now several brands in both Mitsuwa and Marukai, but they are certainly not the most common tsukemono on their shelves and sometimes they sell out. Every time I go in, Mr. Mochi (my new nickname for the boyfriend) has to restrain me from taking their entire stock. I am paranoid they will never come back.

Now imagine if your favorite food disappeared. If pizza disappeared, I could make a pretty good version at home. If In-N-Out went kaput, I could make a decent facsimile at home. What happens if my coveted pink pickled garlic were to disappear? I would be royally fucked. I am not ruling out the patient relatives, however.

In the meantime, I will continue hoarding them in my shopping cart until Mr. Mochi catches me.

Update: I've got umesu (梅酢), which is the pickling liquid left over from making umeboshi, which all the recipes I've found indicate I should use to make this at home. I've had my cloves pickling for over a month, and they are inedible. The umesu has too much salt, and the vinegar is too weak to battle the garlic. Back to the drawing board, but don't worry I'm not giving up. I think I need more vinegar, more sour tang, and less salinity. It might be as simple as a different bottle of umesu, but this battle isn't over!