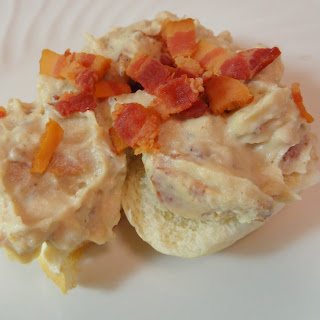 I've made tons of sausage gravy (and eaten even more) but when Mr. Mochi came home with a steal: beautiful thick-cut bacon for 40 cents a pound, I knew I wanted to try bacon gravy. Bacon gravy is made the same way as sausage gravy, with a few quirks.

Now, this recipe is just made for serving over piping hot biscuits! Unfortunately, my oven decided to die on me, so I was not able to make any fresh biscuits. I don't know whats wrong, but the oven just won't heat up, and my biscuits just sat there as I fiddled for over an hour with the dial, turning it on and off and waiting 10, then 20 minutes to see if the oven would ever heat up. Hurray for cheap apartment living?

Putting aside my oven's betrayal, let's focus on those quirks. The bacon will take longer to cook than the sausage, because you want it nice and crisp to stand up to the gravy. It will also release quite a bit more fat, so you either have to use less bacon, or drain away some of the fat.  It is also less seasoned than sausage, so you will add more pepper, but less salt since the bacon is cured.

Brown the bacon in a deep saucepan or pot until crisp and the fat has been released. Take a small portion of bacon (2-3 tablespoons) and put on a paper towel to drain for garnish. Pour off approximately half the fat and reserve for another use.  Add flour in two tablespoons at a time, allowing the flour to brown properly in between. You can adjust the flour, less for a thinner gravy and more for a stiffer one, but I find that 5-6 tbs of flour is my happy place, too much will make the gravy taste pasty. The flour will mix with the fat and stick to the bottle of the pan where it will brown but make sure the flour/fat mix doesn't burn at the bottom. This flour/fat mix is called a roux, and is what thickens the milk into gravy.

After the gravy and flour have heated up, add in the milk and whisk, making sure to scrape the roux off the bottom of the pot. After the gravy has been bubbling for about 10 minutes, it's done! Add salt and pepper to taste. Serve over biscuits and sprinkle the reserved bacon on top, provided you didn't eat it all while stirring the gravy.