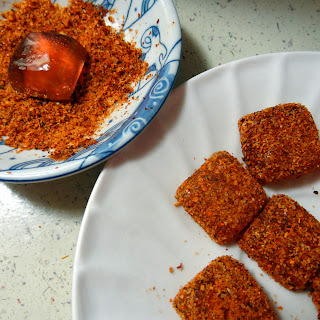 Growing up in southern California, I was fortunate enough to be able to experience a myriad of different cultures. Not to mention the best thing about being a self proclaimed mutt is that growing up with so many tastes and textures means that rarely was I squeamish about a new food or cuisine.

So when the ice cream truck rolled down my grandmother's street, my brother and I were just as likely to pick a Mexican sweet as a popsicle. In fact, I was pretty obsessed with the Lucas Acidito Chili Powder, a salty tangy slightly hot powder that came in a little shaker with a duck on it. (Unfortunately, it was tested high for lead content in the late 2000s and subsequently pulled from the U.S. market. Lucas powders have been reformulated, and I bought some for my birthday in September and I can vouch that they are still delicious.)

My tastebuds got a flashback when my coworker brought some Mexicandy back from her recent trip to Mexico. She plopped down a big ziplock of Vero Mango chili lollipops, tamarind pulp candy, and mazapan, and I was in heaven. The first lick of the lollipop brought me back to sitting on the curb outside Grandma's house. It's funny how food can do that to you.

So after my most recent foray into Mexicandy appreciation, I decided I had to make my own version. As tasty as those lollipops are, I happen to be lollipop challenged. I either somehow stab myself in the mouth or drool on myself while trying to do something two-handed with a sucker in my mouth. Therefore I wanted to make them without the stupid paper stick.

There are two methods I made, one with the lime chili powder coating on the outside, trying to closely mimic the lollipops. This made for a very intense outer coating, but then it subsided into a normal sweet candy similar to a jolly rancher. The second batch I incorporated the lime chili powder mix directly into the hard candy, for a milder but longer lasting tangy zing.

Prepare molds by spraying with cooking spray. If you do not have molds, use a rimmed baking sheet lined in foil sprayed with cooking spray. In a large saucepan, combine the water, sugar, and corn syrup. Over medium-high heat, stir until the sugar is dissolved. Stop stirring and let the mixture boil until it reaches 260 degree Fahrenheit, washing down the sides of the pan with a pastry brush and water occasionally to avoid crystal formation. Add in your food coloring if you want, do not stir but let the boiling action mix it for you. Remove the pot from heat at 300 degrees, and let the boiling subside. When it does, stir in the flavoring.

Now you have two choices, depending on how you want to add your chili powder mix:

For the coating on the outside: Pour the candy into mold or foil and let cool. For foil, you will wait a couple minutes to let the candy harden up, then use a butter knife coated in cooking spray to score the candy so you can break it into pieces later. Do not drag the knife, but press down (or else it will be ugly like mine were). Once they have cooled, take individual pieces and quickly dunk them in hot water until they get sticky, then roll in the chili powder mix, covering any sticky spots. Let dry.

For mixed in: After adding the flavoring, sprinkle in approximately 2 tbs of chili powder and stir (trying to avoid any large clumps of powder) then pour into molds and then sprinkle some more powder on the top. Let dry.

Store in a cool dry place (not the fridge or they will get super sticky).

For lots of zing, feel free to do both methods! 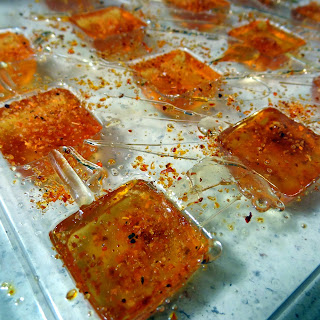