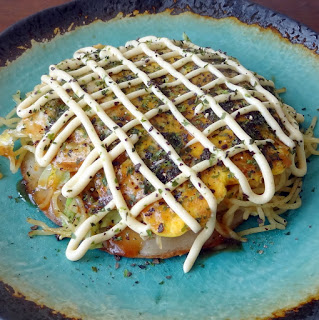 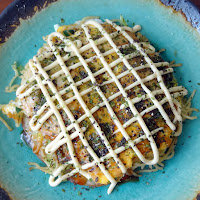 Hiroshima-style okonomiyaki is hands down the most famous regional food that Hiroshima boasts, so I knew I'd have to take on the dish to share it with you. They even have a "food theme park" in Hiroshima: a giant building literally called Okonomiyaki Village with 24 different okonomiyaki restaurants. The best thing is unlike Yawatahama-style champon, I'd done my research on this dish. I had this dish on Miyajima, paired with another Hiroshima special: fresh grilled oysters. 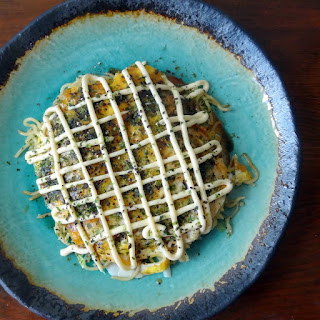 I was a little intimidated going into this, because when I went to the okonomiyaki shop, they prepped everything on a griddle right in front of me and they were so fast and adept at flipping the whole thing and cracking the egg. Plus it does require some surface area and I don't have an electric griddle, but I found that two frying pans are just fine. I was delighted to find that despite my initial fears, this is a quick, easy, and forgiving recipe.

A couple of notes: I used dashi instead of water for an extra savory taste in the batter, and aonori is nori that has been very finely chopped into almost a powder. Feel free to use nori furikake in a pinch. 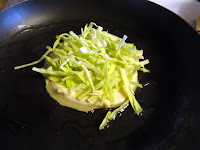 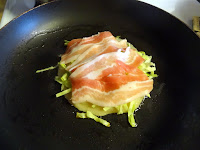 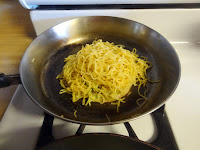 Mix the all-purpose flour with water or dashi and stir well until there are no lumps. Heat half the canola oil over medium heat in a non-stick skillet or on a griddle. Pour in half of the batter and let it spread into a thin crepe-like circle. After the batter is halfway cooked, carefully mound 1 cup of cabbage on top of the batter. Place four slices of pork belly on top. When the batter becomes browned, carefully flip and cook the other side until the pork belly becomes crispy and brown. 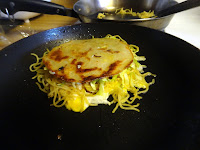 In a separate skillet, or the other side of your griddle, heat up the remaining teaspoon of oil and heat up the the yakisoba noodles. Once they have gotten loose and warmed up, drizzle on one tablespoon of the so-su and continue to stir fry the noodles until they are coated. Mound them roughly into a mound the diameter of your okonomiyaki. 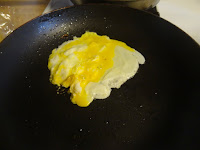 Flip the okonomiyaki bacon side down on top of the noodles*. Crack an egg into the pan that the okonomiyaki just vacated and mix it a little bit into roughly the same size as the okonomiyaki (we aren't going for perfection here. When the edges have set and cooked on the bottom but the top is still runny, carefully flip the okonomiyaki noodle side down onto the half cooked egg. After the egg has finished cooking, invert the whole thing egg side up onto a plate. Drizzle on okonomiyaki so-su to taste, then garnish with mayo and aonori. 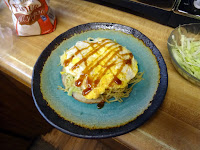 *Your whole goal is to get it assembled in this order, starting from the bottom: batter, cabbage, pork belly, yakisoba, then egg and don't worry too much how that is accomplished. As shown in the picture, instead of how I describe the cooking technique in the recipe, I accidentally flipped it a little early when browning the pork belly side and it wasn't browned as I'd like on the bottom and wanted it to cook further as my egg cooked. So I just flipped the whole thing over again and piled the noodles on top. This recipe is very forgiving. 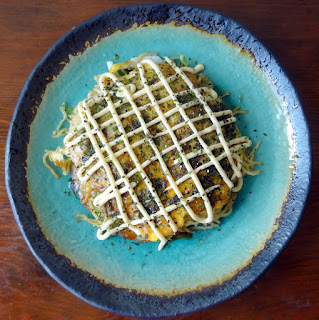