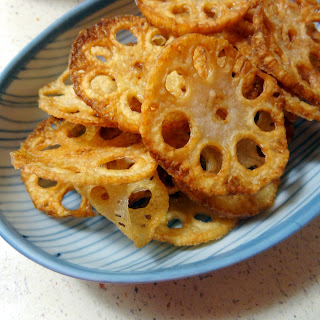 Renkon (蓮根), also called lotus root, is the rhizome of the lotus plant. It is eaten boiled, steamed, deep fried, stir fried, and even raw if it's young. Lotus root is very popular in a lot of Asian cuisines for its crunchy texture and and aesthetic appearance. The lacy holes in lotus root make it a showstopper in many dishes, giving visual appeal with no extra work besides slicing the root. Traditionally it is peeled before cooking, but for this recipe you can leave the skin on. The skin is kind of tannic, but the frying largely eliminates that, but I peeled mine just in case.

And while it's a starchy root, lotus root has a lot less carbohydrates and calories than potatoes, while being a good source of dietary fiber, thiamin, vitamin B6, phosphorus, potassium, copper and manganese, as well as a great source of vitamin C.

It also makes a pretty damn good chip for snacking.

While looking at izakaya food while writing my introduction to my review of Izakaya Honda-ya I fell upon pictures of lotus root that had been sliced thin and fried to a crisp like potato chips.

Hello? Why does my local izakaya not have these?

Don't worry if you don't have a deep fryer, an inch or so of oil in the bottom of a saucepan will work fine.

I had an adventure in cooking gadgets, both with the new fryer (which was a breeze) and another with borrowing my mom's Geka meat slicer. It's a hand-crank slicer that is supposed to suction to the table, but instead insists on detaching and trying to hike up towards me. I suppose at one point in time it was pretty nifty, but now its just scary and dangerous. The best part is I discovered that the device that regulates the thickness you are slicing no longer holds, and if you push a piece of veggie against it with any force, it moves away from the blade. I wasted a lot of renkon on this archaic piece of history. Coolest part? The base is made of laminated particle board unfinished on the inner edges next to the blade. No really, it's made of plywood! I need a mandoline or something similar, stat.

Renkon aka Lotus Root (as much as you want, but you will have to fry in batches)
sea salt
your oil of choice for frying
3 cups water
1 tbs vinegar (rice or white)

Peel and slice the Renkon as thin as you want, from paper thin up to about a 1/4". I wanted mine thinner than what I got, but at least I didn't lose a digit to the aforementioned angry antique. Put the renkon slices in the water mixed with vinegar to keep it from discoloring (about 10 minutes) while you heat your oil to 350 degrees Fahrenheit. Pat dry the renkon carefully, then deep fry in the oil until golden brown. Since my slices were thick, they are darker on the edges than yours might, since they needed longer to get crispy all the way through. Drain on paper towels or wire rack, season with salt, and serve immediately. Also good might be some nori powder, furikake or even some wasabi powder. 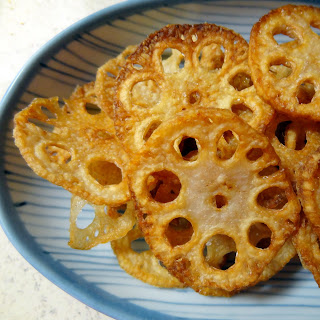